The EICMA or Milan Motor Show as they call it is an annual trade show in Milan that features only motorcycles.

It sounds like a dream show for riders, doesn’t it?

EICMA 2019 witnessed some of the most exciting motorcycles unveils. If I could describe EICMA 2019 in one word, I’d say “LIT”.

Some motorcycles were brand new while some were updated versions of their predecessors.

And today, I’m going to tell you about 7 hot motorcycles from the EICMA 2019 that will make their way to India next year.

After a long wait, finally, KTM unveiled the Duke 390 Adventure at the EICMA 2019. Honestly speaking, KTM Duke 390 adventure was the show stealer at the EICMA. Riders from all around the globe were eagerly waiting to see the 390 adventure.

Looking for a touring motorcycle? Check out this article where I have listed the best touring bikes under 5 lakhs.

Hero’s Xtreme 1r stole the limelight when it was unveiled at the EICMA 2019. The bike is Hero’s vision of the Xtreme 200. It is a concept right now, but Hero claimed that we can see it in India by the end of 2020. The bike gets modern styling and features and is aimed at attracting the younger generation.

Hero is taking a different approach in making the Xtreme 1R fast. The Xtreme 1r will be powered by a 200 cc engine but it will be extremely light (under 140 kg).

The model showcased at the EICMA 2019 was equipped with slick tyres, a GoPro camera on the tail lamp and a full LED headlamp. But I don’t think we’ll get all that on the final variant of the Xtreme 1R. It is expected to launch in India by the end of 2020.

Care for riding safety? Check out the best affordable riding gloves you can buy in India.

Kawasaki Z900 is one of the most popular liter-class naked motorcycles in India. And Kawasaki has updated it for 2020. It will get a EURO 5 compliant engine in addition to a completely new electronics suite.

The older versions of the Kawasaki Z900 didn’t have any electronics on offer. But the 2020 version will come with three-level traction control, four riding modes ~ manual, ride, rain & road. And two power modes.

Another distinguishing element between the older Z900 and the newer one will be a new led headlamp…and a new full TFT dash with mobile connectivity.

Do you know, KTM Duke 790 is now available in India. But here’s why Indian riders may not want to buy it.

Benelli has already launched its Leoncino 500 & Leoncino 250 in India. And up next is the eldest member of the Leoncino family, the Leoncino 800. Benelli unveiled it at the EICMA 2020 and it going to launch in India in 2020.

The Leoncino 800 will be powered by a 754 cc twin cylinder engine pumping 81.6 bhp. Benelli wants to pitch the Leoncino as a scrambler and that’s why the 800 gets spoked wheels with tubeless tyres.

Since Leoncino 500 is already in India, I have listed down 7 reasons why you should buy it (and 2 to skip)

To stand head to head with its ADV competitors, Suzuki has updated its new V Strom 1000. It now gets Suzuki Intelligent Ride System which makes it a technologically advanced ADV. The design of the V Storm 1050 has also been updated. It now looks bigger and boxy, inspired by the original DR big.

Suzuki discontinued the V Strom 1000 long time back in India, but now they’re going to get it back in 2020. It will compete with bikes like BMW F 850 GS,

Like touring on motorcycles? You’ll love the Fego Float Air seat. Check out my review to know all about the amazing Fego Air Seat.

Honda got our heads spinning by the number of Rs they used in their new flagship race bike. It’s called the Honda CBR 1000RR-R Fireblade. After assistance from the Honda Racing team, the new Fireblade is now one of the most powerful production motorcycle money can buy.

The kerb weight of the CBR1000RR-R is 201 kgs and it produces 214 bhp of power. So it clearly shines when it comes to power to weight ratio. The aerodynamic efficiency of the new Fireblade has also been improved. It now gets a sharper design and side fins to make it cut through wind easily.

After its debut in EICMA 2019, Honda is likely to bring the new Fireblade to India sometime next year.

Want to become a motorcycle racer in India? Here is the step by step information.

BMW has made some really big changes to its S1000 XR for 2020. The S100XR is a sport-touring motorcycle, built for people who want to tour at high speeds. It combines the performance of a sports bike with the handling and comfort of a tourer.

The 2020 model produces 165 bhp of power and weighs 10 kilos less than the outgoing model.  And since BMW is trying to expand its lineup in the Indian market, we can expect the new S1000 XR to launch next year. 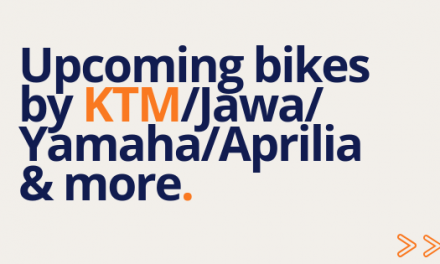